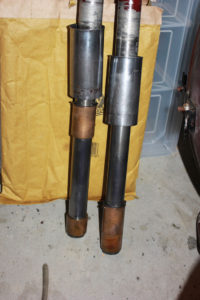 Old and worn out

So many jokes about forking forked forks but alas, none are suitable for this forum.

I first pulled the Square Four forks part a couple of weeks ago. However I got a bit stuck with a difficult to access circlip which none of my tools would quite reach. I put them to one side and did other things while awaiting the appropriate epiphany moment to strike on how to get the circlip out which will release the stanchions from the sliders. How would have my father do this job back in the 1950s in the wilds of New Zealand’s West Coast, South Island? The answer was that he would use whatever tools he had at hand (probably the back of an axe). To be fair, I have a lot more at hand in my tool kit than he would have had access to. Thus armed with my renewed “bush mechanic” rationale, I was able to use a long screwdriver with a “touch of mallet” to get the circlip out of its grove and then slip another screwdriver underneath the circlip and gradually work it out of its grove. Success! 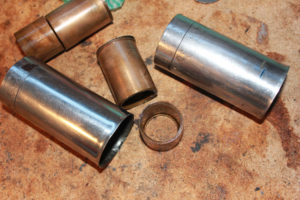 The rest came apart quite readily. A threaded plug screws into the end of the stanchion to hold the lower bush in place. I have finally found a use for that 1 3/16 socket that I purchased for some long forgotten reason. As luck has it, it was just the size that I needed today to undo that plug. There were a couple of small marks on the fork leg. I was able to clean those up with a fine file and some wet and dry. I then polished the fork legs with a bathroom creme cleaner to make sure that there was nothing that could damage the new seals and bushes.

Fork seals replaced and new upper and lower bushes fitted. The stanchions are now ready for fitting to the lower fork leg once they are painted. Another small but important step towards getting Squariel back on the road. 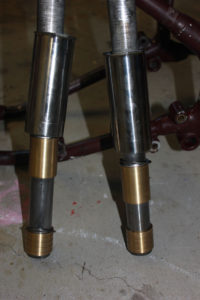 As good as new