So here we are at the end of January already. Progress on the Squariel build has almost crawled to a halt. Then again, I can count the amount of time that I have spent at home in the past month in hours rather than in days. Being Australia day holiday yesterday, what better way to celebrate heat and humidity than to spend it in the garage. Time then to get serious and start to make some visible progress.

Draganfly Motorcyles provide a kit to replace the loose bearing headrace with a taper roller headrace. This was a no brainer decision to change as taper bearings give a much wider contact area and are tidier. Replacing these was reasonably straight forward and would have been even easier if I had a press. As it was, I was able to make up a mandrel and tap the lower bearing on. 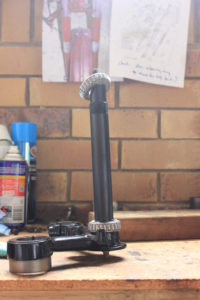 I had previously replaced the bushes and seals in the fork legs. Putting them together involved a bit of head scratching to get the retainer clip in without damaging my beautiful paint work. Sure enough, it took a couple of attempts as I had long forgotten how they came apart. I got there eventually. Assembling the headstock and fork legs was straight forward. Just like a heavy-duty bicycle! 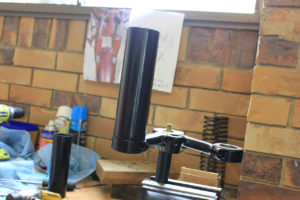 Doing this blog has been a great experience. Not only has it kept me motivated, it has also connected me with new people in the Ariel community and re-connected me with old friends. Among the feedback that I have received has been why do I not make more videos? There has been a couple of reasons for this. First is that to be honest, most of what I am doing, I am figuring out on the fly. This means that jobs that I think will take an hour will often take 4 hours or more. In my mind who would want to see a video of someone scratching their head and swearing a lot? Then again, movies are not made in one take, so why not cut the bad stuff and just include the good stuff? With that in mind, I have posted my second ever YouTube video. I have also moved from Dot Media to a dedicated YouTube account for the Ariel. Apologies to the 2.5k people that have viewed my first video, you will get to see it again under a different name. The new video is pretty basic as I had done most of the work before I started filming. It has given me some ideas on what to do so future videos should be of more value. 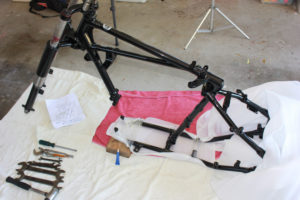 The next job that I wanted to do is assemble the Anstey Link rear suspension. Unfortunately, checking with Draganfly, almost all my back-order parts are rear suspension related so that is out of the question for now at least. I may remount the gearbox next. Not a big step forward in actual progress but a psychological step forward for looking like something has happened. The wheel rebuild is beckoning. At least that is something that I am comfortable with and will make for a good video.

I was in New Zealand at Christmas and checked in with Shiny Bits my friendly chrome plater. I was hoping that my tank would be finished. It was a longshot but sadly the tank was not completed yet. Seems that my other mate’s Rickman Metisse frame has gotten the lads more excited than my old fuel tank. Hopefully it will not be too much longer.