The Burman GB gearbox was introduced to the Ariel Square Four from 1952 and all GBs are pretty much the same. Except where they are not, of course!  Now that the parts are cleaned up and I have had a chance to look at it properly, I am well impressed with the engineering in it. Wear and tear? Not even! There is a little bit of wear on the gear selector pins and as I mentioned in my previous post, the bearings are rumbly. The rest of the component parts look as if they have just been unwrapped from wax paper. There is no sign of wear anywhere on the main rubbing faces or bushes. 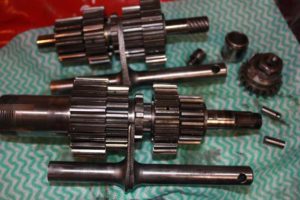 Nothing to see here

This gearbox was designed by engineers with pencil and slide rules rather than AutoCAD. It was machined by tradesmen hunched over lathes (with a ciggie hanging from their bottom lip) rather than with CNC. Six Sigma programmes which determine allowable levels of failure to improve profit over reliability? Not here. In short, it is built like the proverbial brick outhouse. No wonder that nothing is worn as with only 40bhp on tap, it has never been under any serious stress. I have seen gearboxes in farm machinery built lighter than this engineering masterpiece.

There is a date code stamped on the kick-starter case which gives a manufacturing date for the gearbox.  My one is L 55 which means it was made in December (A = Jan) 1955. It is a reasonable assumption that my machine was made in late 1955 to early 1956. This ties into the registration date of 1956 and the bike has the large oil tank introduced in 1956. A handy cross check for authenticity of the machine.

The burst of progress from the past couple of weeks will die down now. I need to order replacements for the worn suspension parts and a couple more gearbox bits. I also need to track down a press so I can replace the gearbox bearings and suspension bushes. After that, there is the damaged gearbox drain thread to repair. On closer inspection, this is going to be more difficult than I thought as the hole bottoms against an internal casting. I shouldn’t be surprised really.