I have been procrastinating. There, I said it. Pro-cras tin-at-ing. I can blame it being too hot over summer to go into the garage. I can blame not having spare budget for bike stuff. I can blame all kinds of things but at the end of the day, I think it has been fear of the unknown holding me back.

I have never had this bike pulled so far apart and there are some jobs which I have never done before on any bike. Gearbox overhaul (18 speed Road Ranger I have done. 4 speed Burman I have not!), Ansty Link rear suspension and hydraulic forks pull down are the other jobs that are unchartered territory for me. It is worth pausing a moment and pondering the engineering genius of Ariel chief designer (moved from Triumph in 1937), Frank Ansty. His patented rear suspension was designed to keep chain tension constant across the arc of suspension travel. 12 bushes with accompanying pins and rods ensured rapid wear and quirky handling characteristics was the legacy that his name is now associated with. 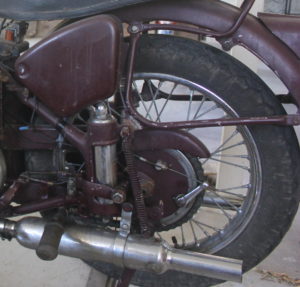 Getting angsty about Frank Ansty 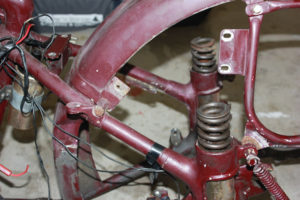 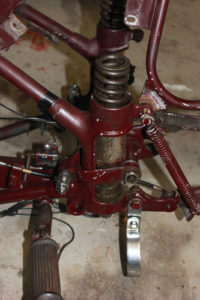 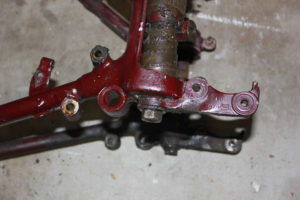 So being Anzac day and feeling patriotic (tenuous link here between the bike being British, me being a NZer living in Aus and my grandfather’s remains remaining at El-Alamein) after an early start for the remembrance ceremony, along with a midweek holiday and cooler Autumn weather, I set to with renewed vigour to make some progress and see what is under 60 years of oil and crud.

The big news of the day is that I have found “blue”. It has been gnawing away in the back of my mind that the UK papers for the bike show the colour as being blue when that was never a colour option for this year bike. Everywhere that I have looked so far has been the correct Deep Claret with no sign of blue anywhere. Well that all changed when I pulled down the front forks and gave them a clean. Well what do you know, the blighter had been blue after all!!

This deepened the mystery as it was a deep Navy Blue rather than the (Ariel colour but incorrect for year) Wedgewood Blue. The bike originally came from near Portsmouth which is a navel base so maybe it was a special commission for an Admiral? A bit of head scratching and another look at the UK ownership papers and I noticed the obvious. The papers that I have are a continuation set issued in 1965. Therefore, I am missing the first 9 years of the bike’s history. It is highly probable that the owner (or previous owner) has painted the bike at some stage in its early years. But why blue? That part of the mystery remains. Pity, as it is not an unattractive shade of blue and would have really made the bike stand out in its day. 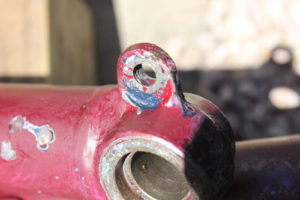 Also unclear is when the bike reverted back to its factory colour. I have no record of it being anything other than Deep Claret for as long as I have known the machine.