Getting the bike to Australia 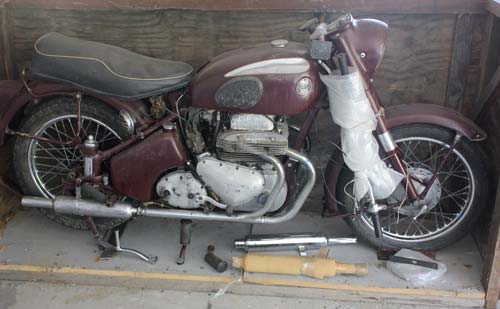 Another family bereavement a few months later meant another opportunity to start the process of relocating the bike. The first part in getting it close to a port was easy enough as I had a friend who could help move it and (I think as way of subtle encouragement to not allow it to sit around for another 20 years) put it in a crate and let me know that it was ready to go soon as it was taking up space in his driveway.

Australian bureaucracy has no limits and, they are not really geared up for allowing into the country a 60-year-old dusty relic of a motorcycle. A helpful shipping agency, mountains of paperwork and enough govt fees to purchase my very own rubber stamp factory meant that only six months later, the bike was finally on the water and heading across the Tasman.

The final kicker was that the last 20km journey by truck cost more than the 2000km by boat to get it here but hey, it was finally in my garage!

MKIIs that have been sitting for a long time (or have not been properly maintained) are known to block the oil feed through the rear crankshaft which can lead to catastrophic failure of the engine. Namely, a crankshaft exits through the bottom of the crankcase (along with a good shot of hot engine oil and an ice cream container of alloy shrapnel) and that is pretty much game over as spare crankcases are a very rare find. Usually they will be OK at light load or low speed but what better time to blow an engine than an early Sunday morning blast up your favourite back road!

With that in mind, I still could not help myself once the bike was at home. After sitting for some 20 years I found that it still had some fuel in the system (rotten of course) and good compression so I cleaned the carb, cleaned and reset the points, gave the tappets and ignition timing a quick check. Fresh fuel and oil along with jerry rigged power supply, I gave it a kick. Square Fours are traditionally good starters and this one had always lived up to the tradition so while I was trying not to be too hopeful, in the back of my mind, I knew that it was a good engine last time I heard it running so was mildly optimistic that it may start. Second kick it gave a cough and third prod on the kick starter and it fired into life. I only ran it for a few seconds but I could see that it was it returning oil to the tank and it was running evenly on all cylinders. I could not have wished for more!