Honing in on the money shot

The money shot indeed. It is well documented by anybody who has owned, restored or even had a passing interest in Edward Turner’s less known legacy. That is that Ariel Square four engines that have been poorly maintained or stored for a long time are liable to destroy engines. Brutal and expensive.

The reason for this is that carbon, crud and other nasties are centrifugally thrown along the crankshaft oil galleries.  Just like cholesterol clogging our arteries, this crud will eventually starve oil supply to the big end bearings. When this happens, catastrophic failure of the engine will result. Often this will also destroy the crankcases. Why are Ariel Square Four MKII crankcases rarer than an honest politician? Engine cholesterol is why. 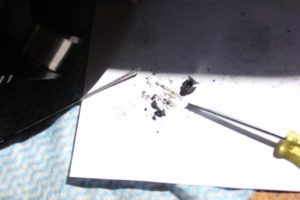 The catalyst behind this Squariel restoration was that I know that the bike has sat dormant for many years. I know that the engine has had a previous rebuild and the oil galleries were checked then. However, it was not worth risking the bike just because I thought it should be OK. This meant a full engine pull down. This triggered the full restoration rebuild that I am doing now.

At the end of the crankshafts are screws. An impact driver made short work of these and I was soon able to get to the honey. To be honest, I was not expecting to find much. Not so, each screw removed revealed a solid plug of crud. Not enough to cause engine failure but certainly enough to validate the engine pull down. 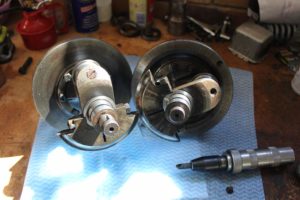 Finishing the dynamo/generator overhaul and clearing the oil galleries were two jobs that I wanted to finish two weeks ago. As is the way with restorations, it did not quite pan out that way. My next steps are expensive ones as I continue the engine rebuild. More parts from Draganfly, more time, more money. It will be a while until I get things moving again so time to give the website a refresh. Stay tuned!