Old Harleys and new Suzukis. What about the Ariel?

A couple of busy weeks both work and family wise have kept me away from the garage. Waiting on some more parts has also been a handy excuse. Just like doing exercise, it is funny how if you lose the momentum during the restoration, then it is oh so easy to fall of the rails and fall behind on the restoring (or exercising). With a stroke of good timing, I received an email from my mentor and motivator with a picture of a 1929 Harley Davidson that he has just completed restoring along with a thinly veiled threat that he can’t wait to see the Squariel looking as good, if not better than his old Harley. No pressure then. Better crack on and do a bit. 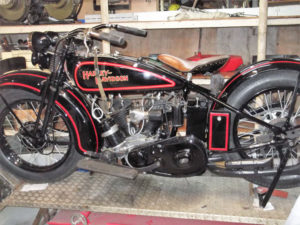 Then a package arrived from the kid’s inheritance soak, Draganfly. Not everything that I ordered arrived as some parts are on back order.. However enough arrived to get me moving again with a headset kit, a special tool to remove the fork seal retainers and some more suspension components. Tomorrow I will get a couple of hours in the workshop and try to get enough done for another update. 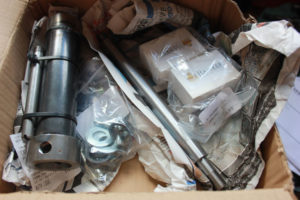 Another package from Draganfly

More than just spare parts in this box

Infinite joy can be found when opening parcel post from overseas and finding local newspapers used for packaging. What are cars worth compared to here? What are houses worth compared to here? What the %#*&!…… then this article caught my eye. Some unfortunate was caught engaging in an act of forbidden liaison with his motorcycle. I mean to say, I love my Ariel Square Four MKII but in a blokey bromance plutonic sort of way. With a Suzuki??? I think I would draw the line there. As you would, the guy blamed alcohol and said that he could not remember the act. I reckon with those skills he might try his hand at politics or a career as an NRL player. Pretty sure he would fit right in (pardon the pun). 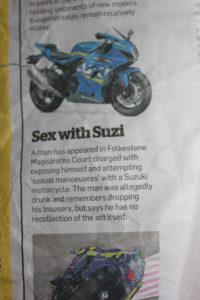 Love your Suzuki more than my Ariel?