Nothing says quality British quite like the words “Smiths Chronometric”. My thoughts tend more to Lawrence of Arabia than had I been talking about Lucas, the prince of darkness. The insides of the speedometer, while not totally unknown to me (to the prospective purchaser of my Ford Escort all those years ago: “honest mister, of course it’s genuine mileage”) it is not somewhere that I was confident of entering.

Smiths was founded by Samuel Smith in London in 1851 as a clock and watch business. At the start of the 20th century, the age of the early automobiles, the company produced the first British odometer (“mileometer”) and speedometer. In the 1930s Smiths agreed a trading deal with Lucas whereby the two would not compete in certain areas and Lucas took on part of Smiths non-instrumentation assets. Smiths became the dominant supplier of instruments to British motorcar and motorcycle firms. In 1946, Smiths and the Ingersoll Watch Company founded the Anglo-Celtic Watch Co. Ltd., which produced watches in Wales. This became one of the largest producers of watches in Europe before the business was wound up in 1980 as clocks, watches, and automotive instruments eventually ceased to be significant markets for Smiths. By the 1980s, the automotive instrument division had been sold, first to Lucas, and eventually to the factory employees. The new company, Caerbont Automotive Instruments, continues to produce classic Smiths-branded instruments with the blessing of Smiths Group plc. 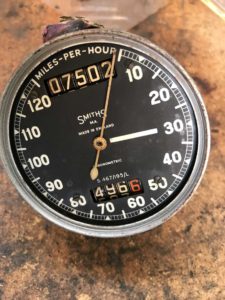 A van passed me by one day recently with advertising on the side offering automotive and motorcycle instrument repairs and restoration. They were not too far from Brisvegas CBD on the South side of the river. Having a Smiths Chronometric speedometer featuring prominently on their website suggested that they would be the ones to entrust with the repair of my Squariel speedo. Alas, my emails and phone messages went unanswered so time to have a look at it myself. 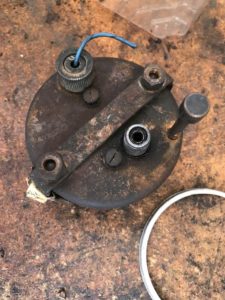 60 years of crud on the outside, once I got it apart, it was surprisingly clean. It was working last time I saw the bike on the road. I put the cable in and could see it work on the end of a drill. Figuring that it is probably OK, I chose not to pull the gears apart. Instead, I give the moving parts a clean and a dash of machine oil. The case and brackets went into the bead blaster. A coating of black enamel and clear on the brass knobs. Back together again using my Shiny Bits bezel and it looks pretty good. Time will tell if this gamble pays off. It is not a big job to remove and pull apart again if it does not work. 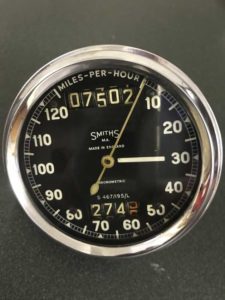 My square, Square Four camshaft is on its way back to Drags for exchange. Along with the cam followers. It will come back with a bunch of engine parts. I will need to order more engine parts next month (read: next pay!) so once they come in, I can send the engine away for service. In the meantime, I need to de-clutter my already cramped work area. I am sure in doing that, I will find some more small jobs to tick off while waiting for the engine. And then there is the fuel tank….