It has been several weeks since I have done a Squariel progress update so here goes. Not a lot of visible progress has happened although some important milestones have been reached.

First off, another parcel arrived from Drags with my new brake shoes and some backorder bits and pieces. The rear brake hub is put aside for painting however I was able to assemble the front brakes. Another job ticked off. 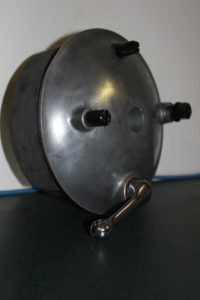 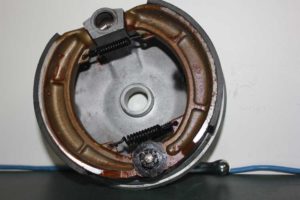 I had previously stripped and cleaned the frame ready for painting. I have had my eye out for a suitable painter for a while now. Being such a critical part of the restoration, it was important to find somebody that understands old motorcycles. I have also decided to powder coat the heavy parts and then paint the tin-ware. I believe that I have found the right person for the job, http://www.robertoscustompowder.com.au/,  and dropped the frame and a bin full of brackets etc. to him on Friday.  Once everything comes back, I will do a review on his work. Until then, there is a frame size gap in my workshop.

Stripping the frame down, it is amazing just how many brackets and parts are bolted to a vintage motorcycle frame. A modern frame incorporates most of the lugs and brackets. Not the Ariel! As well as the heavy frame, there was a total of 34 other parts that went over the counter for powder coating. That is where the heavy in British Heavyweight comes from. 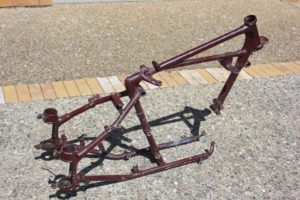 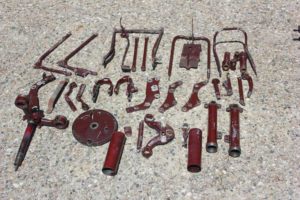 In other progress news, I spoke with Geoff from Shiny Bits plating a couple of weeks back. I sent the fuel tank over to him to strip and assess if it was worth repairing the tank or should I bite the bullet and replace it. The good news is the once they removed the paint and old chrome, the tank itself was not too bad. It has a decent sized (about knee sized actually) dent in the right-hand fluting but no other damage and no rust to speak of. The repair job was not great, so Shiny Bits are going to get it repaired and will re-chrome the tank. I will pick it up over Christmas all going well.

While visible progress has slowed in recent weeks, things are still ticking along. I am thinking that rebuilding the wheels will need to happen soon as a rolling chassis will help keep the painted parts out of harm’s way.