Tanks for the Memories

Has my tank finally arrived back from its journey? Tanks for the memories indeed. Of course it hasn’t! The good news is that it is finally finished. The repairs are complete. Shiny Bits have finished making its bits shiny and the insides have been sealed to provide protection from our evil modern fuel. So what could go wrong? Well, I was told that it left NZ and I was camped at my post box waiting for it to arrive. Then I received a call from NZ to advise that it was returned to sender and is back where it started.

This is where it gets complicated. NZ Post accepted the tank for shipping and charged a medium sized Lotto win to freight it across the Tasman. At some point before it left NZ, they then decided to reject the shipment and send it back. Reason? Once we contacted them, they said that the reason why it was rejected was that they use commercial airlines to transport their packages and that commercial airliners class fuel tanks (even if they are in unused condition) as dangerous goods and will not take them. Disappointing given that it crossed from Aus to NZ by the same way but OK I can accept that. NZ Post, just given me my money back and I will try another avenue. Thus began the bureaucratic process from hell to get a refund.

Well, the lovely lady at NZ Post, after telling me that they would not accept it, told me to try DHL as they run their own aircraft. Fair enough I said. How about my refund? I have given it to a case manager they told me. They will be in touch. Yeah right!

While searching for a contact number for DHL, Google proudly told me that NZ Post has a partnership contract with DHL for their overseas freight requirements. WTF NZ Post??? A call to DHL confirmed that yes they have no issue taking my Squariel fuel tank and that NZ Post has an agreement with them. They also told me that I would save some money by sending it via NZ Post as they have bulk pricing arrangement with them.  As if salt needed to be rubbed into any wounds, DHL then told me that they fly daily to Brisbane so could be delivered next day after I drop it off.

I have often looked at forums where people bag out their local Post service. I usually have ended up thinking Aus Post can be ordinary at time but is generally OK. NZ Post has never given my grief, so they must be pretty good. Until now of course as my opinion of NZ Post has changed significantly. Current state is that the tank is still in NZ. I have a case open with NZ Post to either refund my money or admit that they have some learning opportunities and will take it and put it on a DHL plane. Or I give up on them, accept my losses and just send it on DHL. Sigh.

I am still quietly accruing parts from Drags for the engine overhaul. I still have some big-ticket items to go so it may end up being in the New Year before I have everything I need. In the meantime, I have been tinkering in the garage cleaning parts and painting things. I am thinking about mounting the gearbox just so I can have some visible progress again. 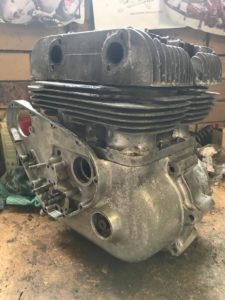