Update on my tank and rear brake hub complete

Update on my tank and rear brake hub complete

After such a long wait, I went to New Zealand full of hope that the team at Shiny Bits would have completed the repairs and plating so that I could give you an update on my fuel tank. As it turned out, yes they had finished my Ariel Square Four fuel tank. Could I bring it home? No was the answer. It is now with another specialist getting a protective coating put on the inside.

It turned out that the fuel tank was in a bad way. Bodge repairs and time meant that there was bad corrosion found once they stripped the old chrome off. Geoff did a good job on the repair work. The result being the tank now has more copper on it than a ’58 Cadillac rear bumper! To protect the inside against our modern fuel and corrosion, it is now getting sealed.  The Ariel Square Four fuel tank is 5 imperial gallons. This is very large for a motorcycle petrol tank. The sealing kits available are made for much smaller tanks. Therefore, it takes skill and care to make sure that the sealant gets correctly applied. That it was almost finished, and I could have collected it the following day was little consolation. A plane to catch meant that I had to leave it and we will make other arrangements to have it returned to Australia.

The trip was not all bad news as I was able to catch up with some old friends. One has just given his wife a gift of an Enfield Bullet. I have been a secret admirer of the Enfields for a long time. This, however, was the first time that I have had a chance to ride one. It did not disappoint. Light and nicely balanced, it was the perfect machine for where they live in a coastal area of slow winding roads.  It will never be a speed demon but for puttering around the bays on a sunny day, it gave instant grin factor. Another acquaintance from the past has built a land speed record bike. Quite a different machine compared to the Enfield! Two Triumph 675 engines and one large turbo charger in a custom built chrome moly frame. It was a stunning piece of engineering and a credit to his skill. I will try and get some more information on it for a later blog. 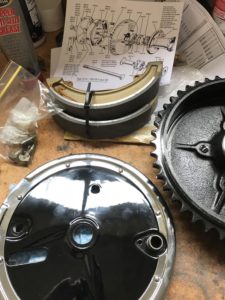 Back to the workshop, I did pick up the rear brake hub dust cover while I was at Shiny Bits. I have riveted that back on and have reassembled the rear brake hub. Exchange refurbished brake shoes from Drags, plenty of copper slip and we are ready to haul on the anchors. 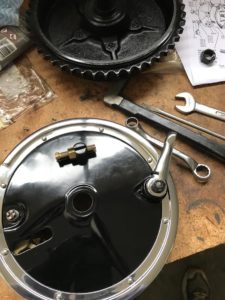 Another small progress step towards my Squariel hitting the roads once again. 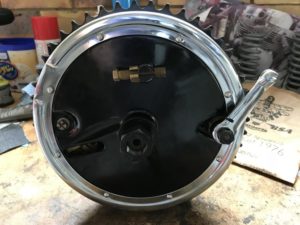 Maybe I did not have to wait so long for my chrome. A friend in the movie industry mentioned that they have been using a brush on chrome finish. If the video is anything to go on, this stuff rocks!

It has been a long time coming. I have no reason now not to pull down the engine for a look. The deadline for Australia introducing a tax on internet purchases is fast approaching. I do not have long to purchase those outstanding big ticket items so it is time to get moving. I do feel that it will be worth another video. Maybe this time without the 1950’s British radio themes!