What is a Lucas C35SD Dynamo?

The Lucas C35SD Dynamo (or more commonly called a Generator in this part of the world) is a 6v 40W generator. This was the standard fitment to the Ariel Square Four from 1949 – 1958. Being a product of “The Prince of Darkness” Lucas, we had better get a couple of jokes out of the way first.

The Lucas motto: “Get home before dark.”

Lucas is the patent holder for the short circuit.

Lucas – Inventor of the self-dimming headlamp.

The three position Lucas switch – Dim, Flicker and Off.

Lucas is an acronym for Loose Unsoldered Connections and Splices

Back in the 70’s, Lucas decided to diversify its product line and began manufacturing vacuum cleaners. It was the only product they offered which did not suck.

Why do the British drink warm beer? A: Because Lucas makes their refrigerators

Those bad jokes out of the way, it is time to get stuck into overhauling the generator. 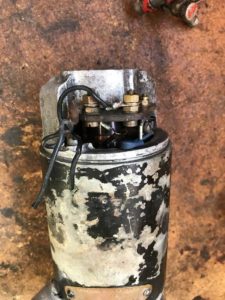 The tear down was quite simple. The generator is held together with two long screws holding each end cap onto the housing. There are two roller bearings and one oil seal. Two brushes and that is about it. 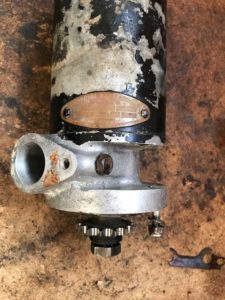 Lucas – The Prince of Darkness

It mostly came apart OK apart from breaking a screw holding a ground wire. The armature was in good condition. There was barely any wear on the commutator. A polish of the commutator and surface where the oil seal is placed was all it took. I also undercut the segments of the commutator. This is to prevent any small bits of copper arcing across the segments. After stripping the old paint from the housing, I gave it a fresh coat of paint. The alloy end caps were bead blasted.

Pulling things apart is always easy. Putting them back together? Now there is where the fun begins.

I thought I would be clever and drill out the broken screw. I should have known better and just drilled a new hole. Half an hour of profanities and a broken drill bit later, I decided to drill and tap a new hole! I have also somehow managed to misplace one of the screws holding the brushes in. Since I have ordered a 5BA tap and a packet of 5BA screws for the housing, I will be able to use one of those screws on the brush holder. 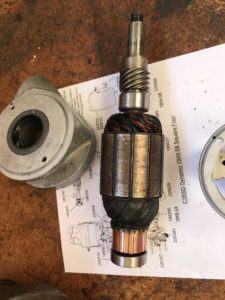 Speaking of brushes. The new brushes from Drags are about 15% shorter than the brushes that I removed. They can’t be too bad then!

Part two of reassembling the generator. I do not have a 6V power source at home, so I will not be able to polarise the generator at this time. More on this later! 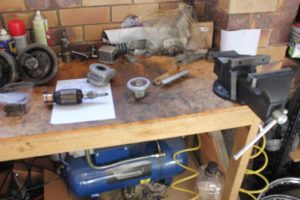 I was told today that my fuel tank is almost ready. Of course.