It had to happen sooner or later and now is the time for the Squariel engine tear down. I have seen numerous UK TV shows and magazines call the engine a “lump”. Lifting the 4GMKII engine off its shelf, I certainly know where the term “lump” came from and I appreciated how long it has been since I have done serious weights in the gym. This thing is effing HEAVY! 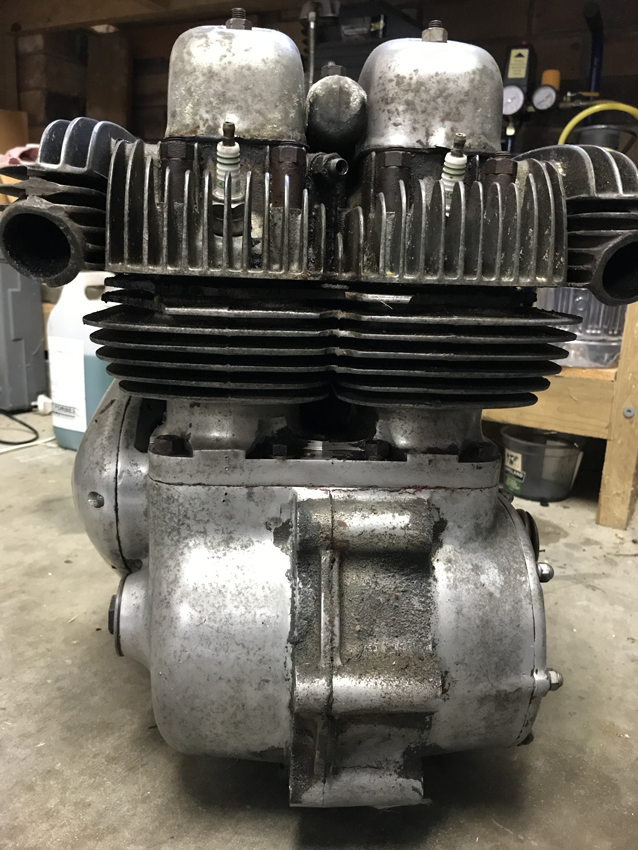 Ready to see what is inside

I decided that the best chance for me to lift it onto my workbench was to lighten it. To do this I would have to remove as much ancillary gear as possible. Removing the side cover, I was able to remove the oil pump. That is run off the end of the camshaft and was simple to remove. To remove the generator was a matter of removing the timing chain. This turned into a bit of a task. Once I worked out that the oil pump drive nut is left hand thread, life became easier. Removing the crank sprocket was harder. It was right hand thread however it did not want to let go. A large breakdown bar and lots of profanities later it came free. 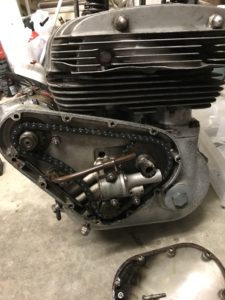 With the timing chain removed, removing the Lucas C35SD generator was simple. I have all the parts that I need to overhaul it so we should have no surprises there. 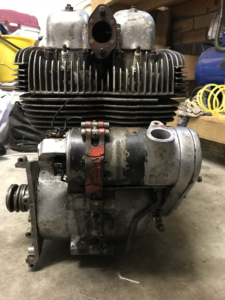 The Prince of Darkness – Lucas Generator

I removed all the head studs next. I was hoping against hope that the head will come off easily. No such hope! Steel studs going through alloy casting. Add heat, dirt, oil and time and that is a recipe for more broken fins!

I had enough removed from the engine now to just be able to lift it onto my workbench. No amount of gentle persuasion was going to remove the cylinder head. I was not keen on using non-gentle persuasion so decided on a different approach.

As the head was not going to come easily, I decided to leave it on and remove the barrel with the head still in place. This meant removing the studs that hold the barrel onto the crankcases. Most came off easily. Most except two that is! They are in a very difficult spot behind the casting that holds the generator. A bucket load of penetrating spray and some carefully aimed taps with a punch and they came free.

I was then able to gently prise the cylinder barrel complete with cylinder head off the crankcases. Well at least that is how I wanted to go. In reality, once I was able to get it moving, it came readily. All except No. 3 piston that decided that it was happy where it was. At that point, I was wishing that I had left the “lump” on the ground as it was not too high for me to get adequate purchase. Three arms would have been handy at this point (no pun intended) but eventually I was able to get the cylinder free. 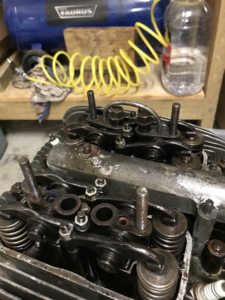 Four of everything. Lots of valves.

A quick inspection and I can see wear on the camshaft. This is disappointing as this cam has only been in the motor 30 odd years! The original camshaft has lost some lobes. It really was a Square Four. Well, at least the camshaft was square! At the time, I had the camshaft rebuilt in Christchurch. Alas, the company that did that work did not survive the Christchurch earthquake. Looks like Drags is going to get some more Aus dollars!

I can see that one of the pistons has had a partial seizure at some stage. There was the tell-tale scuff marks on the skirt to indicate this. The bores still have hone marks in them. That is a good sign. The camshaft has endfloat more than it should. I will be replacing the camshaft, so I will sort that out when the time comes. 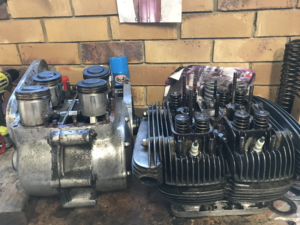 Barrel is finally off

I still need to get the cylinder head off. I have given it a good soaking in penetrating fluid and will have another go tomorrow to get it off. Then I need to pull down the bottom end and see what surprises are in wait. I will also check the oil galleries once I get the cranks out.

Still no word on my fuel tank. One day maybe. One day! 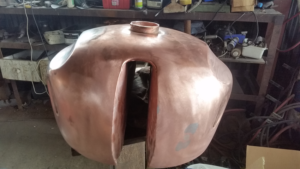 Copper coated but where is it?

Monday update – The cylinder head is now separated from the cylinder barrel. The effort involved in this was far greater than the ten words taken to describe it. More later!