Wheels on the bike

Wheels on the bike

The wheels on the bike go round and round. OK, they sort of do. I was originally going to leave the Squariel wheels alone. A bit of a clean up, new bearings, brake linings and some new rubber, they would have been fine. However, once I got the frame back from Roberto, this idea was never going to fly. With everything else looking a million dollars, hundred-dollar wheels were never going to be good enough.

I have decided to go with stainless spokes and rims. They are a bit harder to build (stainless spokes stretch and have a different feel when building) but will see out my tenure with this Ariel Square Four. Stainless rims were a harder call as I am trying to keep to a restoration model of practicably original. They look good and will work well with the spokes. Sorry chrome steel rims! 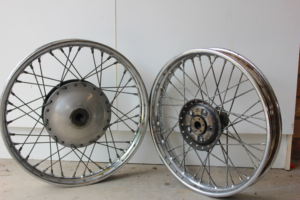 Tyres off. Ready to rebuild

The tyres on the 4GMKII Squariel have been on it as long as I have known the bike. It is not safe to put them back, so it was only curiosity that made me want to date them. No, not via Tinder! All tyres have a manufacturing date stamped on them. Post year 2000, it is has a 4 digit code. E.G. 2515 the tyre was manufactured in the 25th week of 2015. Prior to 2000, a 3 digit code was used which tells you the week of the year and the last number of the year. This means 147 is the 12th week of any decade prior to 2000, ending in “7”. The rubber on this Ariel are much older than 2000, so they are much harder to date.

The front tyre had 147 date code while the rear has 346. This tells me that they were manufactured in April (14th week) and August (34th week) respectively. The year for the rear could be 1957, 1967 or 1977. While the year for the front could be 1956 (making it original fitment), 1966 or 1976. While the front tyre is suspiciously older looking than the rear (it may well be original), I will take a stand and presume that my father changed them both in 1977 which would be about when he was putting the bike on the road in NZ. 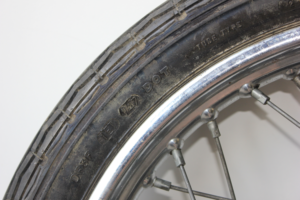 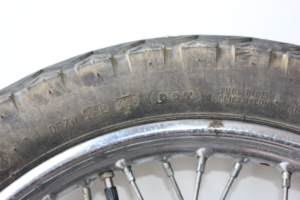 To remove the tyres, I splashed out and purchased a set of the very best motorcycle tyre levers that Alibaba could supply! My mother used to go spare at us kids for using her table spoons for removing our bike tyres. It was some comfort, that the ones that I purchased were like a scaled-up version of mother’s soup spoons. 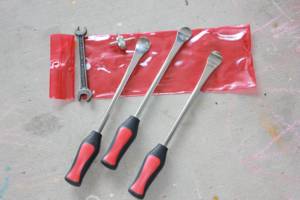 When removing the tyre, first remove the valve to let out all of the air. Next step is to break the bead. This is to loosen the tryre bead from the beat seat. For a motorcycle tyre, the easiest way to do this is to stand on the tyre sidewall as close to the base of the sidewall as possible. You may to have work your way around the rim a bit if it is tight to remove. Flip the wheel over and do the same to the other side. With the tyre now off the bead lock, removal can begin. Always start opposite the valve stem when removing a tyre and work away from the valve stem when fitting one.

After removing once side of the tyre from the rim, reach in and pull out the tube. Now, from behind the wheel, put the lever back in and exert pressure backwards. This will put tension on the tyre bead and you can use this tension to help remove the tyre from the rim. I use a soft faced hammer, and the tension caused by the lever to tap the tyre from the rim.
The front tyre came off surprisingly easily. The rear tyre was stiffer and harder to get off but after a decent amount of sweat and profanities and we got there. 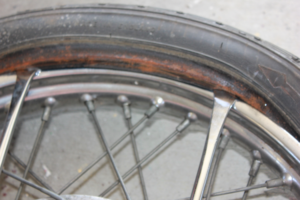 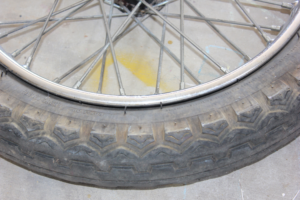 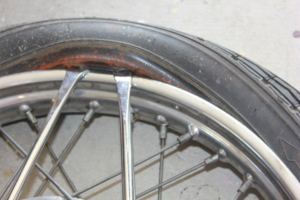 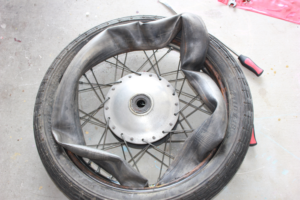 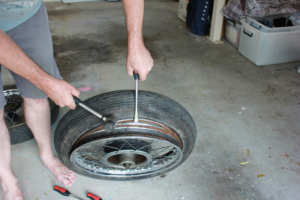 Spokes are measured by gauge (same as wire) and have a pattern to suit application and rim type. When talking to wheel people, they will talk about “cross”. This is the pattern of the spoke in how many times it cross other spokes between the rim and the wheel hub. This Square Four front wheel has a two cross pattern. The rear, however, has four cross on one side and two cross on the drive side. A little unusual but equally, the rear wheel set up on Ariel’s of this era is unusual as it uses a QD (quick detach) drive sprocket. This means that the wheel can be removed without removing the chain.

Typically, a wheel with four cross spokes will have a slightly softer ride. This is because the spoke are leaned over and offer some natural give. A wheel with no cross is called a radial spoke wheel. This makes for a very stiff wheel. Radial spokes are also not good for rear wheels as they do not like the torsional stress that the drive chain puts on the wheel. 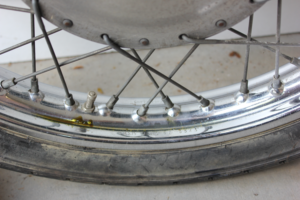 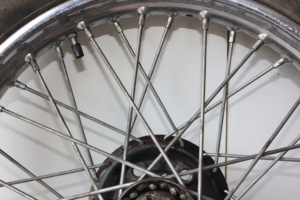 Wheels often have an offset to them. On the Square Four MKII, the front wheel is conventional. The rim will sit in the middle of the hub and spoke lengths are the same either side. The rear wheel has different length spokes and different lacing pattern on either side. I will measure the offset before pulling the wheel apart. More on this in the next update. 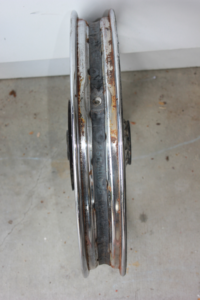 One last point worth noting. Have a look at where the valve stem pokes through the rim. The spokes should angle away from the valve stem. If it does not, then you have a difficult job getting an air pump onto the valve once the wheel is back in the bike. Most motorcycle rims have dimples and angled spoke holes so this is not an issue. Why I am mentioning it is that if your rim has a drilling for a rim lock, then be careful that you know which one is the tyre valve and which one is the rim lock. On a bicycle wheel it is easy to lace the wheel incorrectly. You won’t realise that you have done it wrong until you try and pump up the tyre. Trust me on that one!